The Scotland Island Progress Association was away to a fine start when just on forty residents turned out for the inaugural meeting held at "Bangalla" on Saturday night January 29th.

Fully appreciating that many residents may have had insufficient notice of the meeting it was decided that a Provisional Organising Committee only would be appointed. This Provisional Committee will vacate office at the General Meeting fixed for Easter Sunday (April'10th) at 8 pm, when all offices become vacant and a committee will be appointed for the ensuing twelve months.

With such a large proportion of Island residents being week-enders and the fact that various sections’ of the island are somewhat remote from each other there are very real difficulties in the way of successfully organisihg a virile Association.

It is therefore necessary for every resident to give his or her support to the formation of the Association and so that a sincere hard-working Committee is appointed to act on their behalf for the welfare of our small Community.

Correspondence has already boon entered into between the Provisional committee and Warringah Shire Mackellar County, Council, the P.M.G., the Bushfire Committee of the Chief secretary’s Department and the local Member, Mr. R. W. Askin. Contact is also being made with the Water Board.

Attendance at the General Meeting of the Progress Association will give residents an opportunity of voicing opinions on the many and varied questions to be discussed and assist in determining the policy to be followed in regard to electricity, water supply, bushfire equipment, public telephones, public wharves and street maintenance etc.

There are formidable tasks ahead of the Association – it can only succeed with the goodwill and support of all residents and the earliest opportunity residents have to give their support will be by attendance at the General Meeting.

A suggestion that some liquid refreshments might be provided following the General Meeting provided on April 10th was turned down by the Committee after due consideration.

Supper will be provided (ladies a “plate” please) and the beverage served will be tea. Those that need it strong and black can have it that way if they want it.

Two meetings of the Provisional Organising Committee have been held to date of preparation
this Newsletter. The Committee’s decisions are reported elsewhere throughout this issue.

Due to the nature of the terrain, the dense coverage of forest and scrub and its comparative isolation, Scotland Island possesses a grave bush fire potential.

It is proposed to form a bush fire brigade and equipment for this purpose will be made available by the Bush Fire Advisory Committee through the Shire Council.

Because of the relatively small number of permanent residents on the Island such a brigade will need the full cooperation of all casual as well as permanent residents if it is to be successful. The knowledge and practice of fire-safety precautions by all residents (including the ladies) will be essential.

Those who have experience of bush fires know of the tragic loss of life and property that can result from the careless burning of rubbish or even the thoughtless discarding of a cigarette butt .

In Victoria in 1939 seventy-one lives were lost and damage of incalculable value was done by the tragic bush fire of January of that year.

A sane outlook on the lighting of fires and some elementary knowledge of fire fighting by residents could prevent a comparable tragedy on the Island.

Members of brigades fighting bush fires are covered by special provisions of the Workers Compensation Act.

An active group of island permanent residents are organising to have their childrens’ fares to school subsidised by the Education Department.

Ferry and bus fares for one family of little tots totals 17/6 a week If they lived in a country area where school buses are subsidised the greater part of this amount would be met by subsidy through the department.

We understand the ferryy fares are also subsidised in the Gosford Woy Woy districts.

If the parents decide to seek the Associations assistance in this matter it should be readily available in such a worthy cause.

In order to boost circulation & also perform a public service we are offering an appropriate prize for winning suggestion on how best to make use of empty bottles (unbranded of course).

First prize is one gross of assorted empties to be picked up and removed by the winner. Location to be advised after the contest.

Ever blow a bugle? It’s much harder than you think and a few local residents were trying their utmost to get even the faintest burp out of one when Tod Gill happened along.

Hoping f or a laugh at Tods expense the bugle was pressed on him and — wait for it — he blew the “cookhouse” call so expertly that all the old soldiers marched straight off home to beg their wives for a meal of stewed bully beef and dehydrated potatoes — just for old times sake.

News that milk might soon be available in cardboard cartons will be welcomed by these folk who fight a losing battle with empty bottles. milk and various.

There appears little likelihood of lolly water and other effervescing beverages being sold in this manner but surely our scientists could evolve some method of dehydrating kerosene so that it could be sold in tablet form. After all we don’t have to drink the stuff.

The Scotland Island Pipe Band promised a skirl or two for the night of the next meeting.

The band consisting of one piper will parade the Island to ensure nobody goes to bed early on the big night.

Congratulations to Mr. Jack Cooke on his exploit, in catching a shark with a broom. Jack literally swept the four foot monster -out of the shallows on to the rocks where it was quickly dispatched and promptly converted into flathead fillets.

Keith Egan also merits applause for his performance catching a nice large mullet by hand without the aid of hook, line or net. Keith merely bent down. from the Church Point, wharf, tickled the mullet’s tummy for a second and then lifted it out all lively and kicking. If in doubt ask the ferry load of passengers who witnessed the incident on Monday 21st.

Once upon a time it was a local legend that there were no snakes on Scotland Island. At least four residents who attended at the inaugural meeting the Association testified to the fact that they have seen a number of snakes on the Island this summer.

Forewarned is forearmed — and after all they did have them in the Garden of Eden.

A sleepy citizen and a sleepy Kookaburra both received a shock when they came face to face on the Eastern side of the Island recently, Both of them awoke with a start and a “Squark” but it is sad to relate that although the citizen can now laugh about this experience the Kooka has lost his most prized possession and now makes a noise like a Mopoke. It seems he suffered the greater shock.

The Shire President and all 11 “A” Riding Councilors of Warringah Shire have now boon invited to attend the Association’s General Meeting.

Due allowance must be made for the fact that our meeting is being hold during the Easter holidays period and our worthy representatives may have made prior arrangements to be else where.

At the invitation of the North Shore Fauna and Flora Association extended to the President and Secretary the Scotland-Island Progress Association we attended a meeting on March l7th called for the purpose of forming a branch of the Society at Newport.

The meeting was addressed by Mr H.J.R.Overall President of the Society, Councilor Corkory, President of the Manly-Warringahah Branch, Mr. Frank Griffiths, Chief Guardian of Fauna and Mr. Miller, Secretary of the Avalon Branch.

These talks were most interesting and indicated the important work the Society does in preserving the lives of our native animals, birds, trees and wildflowers. Encouragement is given in planting native trees and flowers- and seedlings and seeds are supplied to interested persons.

In the Avalon district many white-gum trees are being planted as a source of, food for Koalas.

We gathered that possums wore becoming rare in the Newport area so we promptly offered to exchange some possums from the Island for koala boars. There were no takers.

Have you returned your complete questionnaire form to Mackellar County Council yet?

Until sufficient satisfactory replies are received by the Council a full investigation of the matter cannot be made by the officials so further progress in the matter rests in the hands of residents.

You will hear the latest information at the meeting on April 10th.

Warringah Shire Council has voted to support the Association in its activities toward securing public telephones at various points on the Island.

Whore would YOU like the first one located? Tell us at the Meeting.

WANTED enthusiastic hard working persons to assume office in progress association. All positions vacant as from 10th April and must be filled. Remuneration will be in the form of personal satisfaction arising from service to community. No bouquets but occasional brickbats guaranteed. Apply ready to start at “Bangalla” 8 p.m. April, 10th.

After the General Meeting of the Progress Association at “BANGALLA” on April 10th light refreshments will be served.

It is hoped that all residents attending the meeting will stay on and become acquainted with each other.

The ladies are requested to provide a “plate” towards the supper.

Majority opinion of the Provisional Organising Committee is that permanent residents should occupy the positions of President and Secretary of the Association.

Keenest exponents of this theory are the Provisional Committee’s President and Secretary!

TO BAY OR NOT TO BAY?

A suggestion that the now progress Association should include residents of the Western Shores and Bays was made at the Association’s inaugural meeting.

An alternative suggestion was also made that the Western Shores should also form an Association thus permitting the two organisations to co-operate on matters of mutual interest.

Island residents will have an opportunity of discussing the pros and cons of these suggestions on April 10th.

Our thanks to Mr. and Mrs Leslie Lucas of “BANGALLA” for making their historic old home available for the inaugural meeting of the Progress Association and providing supper for the forty residents in attendance.

Mr. and Mrs. Lucas have also kindly offered their home for the next General Meeting of the Association at 8 p.m. on April-10th.

for the preliminary work done prior to the last meeting with the Warringah Shire, Mackellar County Council and the Water Board.

LEN BARNES…
for transporting so many residents to the last meeting.

for acting as Minute Secretary and providing an accurate record of proceedings.

for those fine -posters advertising the next meeting.

for his offer of assistance with water transport to the next meeting.

for his welcome contribution in providing paper and duplicating this newsletter.

PLEASE PASS IT ON: We hope to have a copy of this newsletter delivered to each house on the Island but it is inevitable that some residents will not receive a copy. You can help the Association by passing your copy on to any interested party and seeing they also attend the meeting. 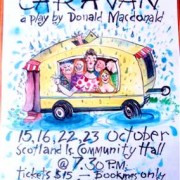