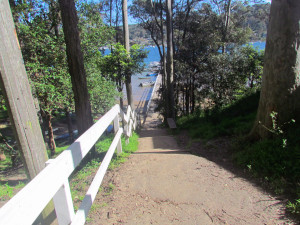 Pedestrian access to Harold Reserve and Carols Wharf, is by a path and stairs from the road way. An unmade pathway through the reserve was created some time ago and over time, with additional use by quad bikes and motorbikes, hasbecome severely eroded.

Pittwater Council, who has care and control of Harold Reserve, deemed this incompatible with the management and preservation of the area, as well as a risk to public safety, and reinstated the post and rail fence alongside the stairs closing access through the reserve. A section of this fence was recently vandalised on two separate occasions and Council apparently reported both incidents to the Police.

The core issue appears to be that the “staircase only” access arrangement makes it harder for people with shopping trolleys and similar wheeled hand carts to go between the road way andCarols Wharf – unlike Bells Wharf stairs which have a paved “step free” path running beside the stairs.

Construction of a similar pathway at Harold Reserve Carols Wharfbeside the stairs to allow for easier access has been costed at approximately $35,000 and not within budget resources for this financial year. In addition, this project would need to be established within the context of an overall management plan for the area.

Such a plan is being developed for Cargo Wharf–Leahvera Reserve following a Community Forum held by a “Cargo Wharf Users Group” in September 2013. It now guides improvement 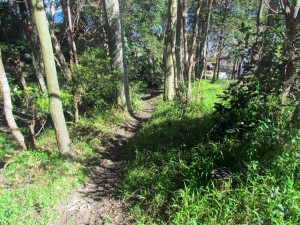 The formation of a “Carols Wharf Users Group” would seem to be a more creative and collaborative approach to solving the access issue rather than continued vandalism.

SIRA’s Parks and Reserves Subcommittee would be happy to facilitate such a process.