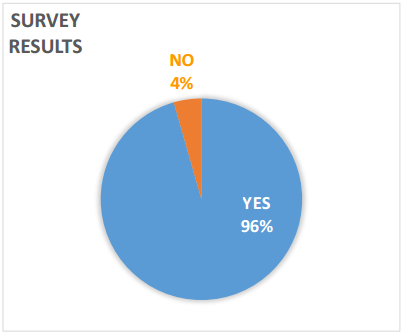 The survey was held as part on an ongoing Scotland Island community consultation and engagement process on this issue. While the issue has been on the community agenda for decades it became more focused in the past six months with the review of the Sydney Water Licence by IPART.

The matter was a major item at the SIRA AGM in February 2015 where we had a guest speaker on the matter talking about Dangar Island’s experience of the installation of a sewerage system. The background information for this survey was provided in part in the survey itself, on the website and at the General Meeting held during the survey period.

The question asked was: “Do you support a sewerage system for Scotland Island, on the condition that the only cost is to connect your household plumbing system to the Sydney Water System?”

There were 100 comments made by people who completed the survey.

In summary this Report recommended that the Priority Sewerage Program (PSP) still be included in the new Sydney Water Operating Licence, but that there is no requirement for Sydney Water to have a timeframe to sewer Scotland Island as Sydney Water have successfully argued that it is too expensive to do so and will only do so if the NSW Government directs them to (see below).

Some relevant extracts from the Report:

We propose that existing Priority Sewerage Program obligations are drafted to require Sydney Water to cooperate, implement and participate in any Government review of the PSP and if required, to implement and comply with the outcomes of any review.

Three PSP schemes, Yanderra, Nattai and Scotland Island are not yet scheduled for completion by Sydney Water. This is primarily as they would be very expensive and therefore would incur significant costs to Sydney Water’s customers. As outlined in the CBA and according to Sydney Water, these schemes would add nearly $5 per annum to the bill of each of Sydney Water’s 1.7 million wastewater customers for a period of 78 years.

There are alternative mechanisms available to the Government to ensure the remaining areas of the PSP are serviced – if this is its intent. These alternative mechanisms include: a direction to Sydney Water under the State Owned Corporations Act 1989 (NSW); or the Government seeking bids from the market to service specific PSP areas via competitive tender, with Sydney Water as a potential public sector comparator.

To add insult to injury, in a major Press Release Sydney Water announced that they have sufficient funds so that:

“Sydney Water is proposing to lower prices for customers over the next four years from 1 July 2016. This means most households will save over $100 on their water & wastewater bill each year…. We’re able to reduce customer bills for 2016–20, because we’ve made significant efficiency gains in the current regulatory period. We’ve become more efficient, without compromising the quality of service we offer our customers…. We’ll also be passing on to our customers very large cost reductions from external factors, notably lower interest rates.”

Sydney Water argues that completing all their remaining PSP projects (including Scotland Island) would add $5 per year to every customer’s bill. This could be achieved 20 times over with the rebate they are now proposing.

On October 20, the new 5 year Operating Licence was released.  A key extract from this document is as follows:

4.4.1 Sydney Water must co-operate with, and participate in, any Government review of the Priority Sewerage Program.

4.4.2 If required by the Minister, Sydney Water must implement and comply with any outcomes (including timeframes) of a Government review of the Priority Sewerage Program.

[Note: The areas to which the Priority Sewerage Program applies are Austral, Menangle, Menangle Park, Nattai, Scotland Island and Yanderra as listed in Schedule 3 of this Licence.]

On Monday August 24, members of the SIRA Water and Wastewater Working Group met with Rob Stokes where we discussed Wastewater, Water and other matters. Rob confirmed the NSW Government’s commitment for connecting the sewerage to Scotland Island as per the December 2012, NSW Government Northern Beaches Regional Action Plan. This is a view he has communicated with the Minister for Lands and Water, the Hon. Niall Blair.

Rob has brokered the establishment of a Scotland Island Sewerage Working Group with representatives from Sydney Water, Pittwater Council and residents of Scotland Island to progress this issue. The first meeting of this group is planned for some time before the end of the year.

Rob’s office is preparing some broad Terms of Reference for this group that will include some timelines. The sticking point will be the degree of financial contribution that Sydney Water will be seeking from residents.  You will recall that our only mandate, as per the survey, is that the only cost to residents is to connect household plumbing systems to the Sydney Water system.

The other matter for discussion with this Working Group will be aspects of the engineering and technical systems as well as design issues which will affect costs. In this regard we are seeking the pro-bono support from within our community, if possible, of a suitably qualified engineer or person with relevant experience to join this group.

Please address your communications to:

Please send a copy to: president@sira.org.au

An afternoon on the green