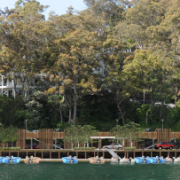 Pittwater Council will be making their final decision whether to accept tenders to proceed with construction for the additional parking at Church Point on the evening of Monday March 7.

A brief survey to all members has been distributed by email to determine community views on two essential matters.

Please come along to this community meeting to discuss these matters.

Quick Background (in case you are new to the subject):

In 2009 a plan of management was adopted for Church Point with one of the objectives to provide benefits to the offshore community. In 2013, Pittwater Council adopted a design for additional car parking infrastructure at Church Point. The additional infrastructure provides 120 spaces, however a number of spaces will be lost due to configuration changes of the area.

We need the community to speak out on the issue and the forum on Sunday is designed to discuss these matters. We will follow up with a Survey and a request that you as residents write to Council highlighting that our community members need to receive the benefits they deserve.

1)    Parking Priority for Offshore Community between 6pm and 6am

The rationale for asking for this is as follows:

How many spaces should be priority parking for offshore residents?

SIRA and WPCA committees have chosen a number of 300. This would include all of the spaces in the current car park (except some that are 4P or disability parking) and some in the new car park.

The local back streets (Eastview, Baroona and Quarter Sessions) currently have no parking restrictions and are used by offshore residents, for two reasons:

At an absolute maximum these local back streets can fit up to 110 cars.

That proposal had two parts, the first part was to introduce no-parking in places where the streets are too narrow to allow parking on both sides – it is estimated that this would remove approximately 15 spaces and was generally consider necessary for safety. The second part was to introduce and 4P parking (from 6am to 10pm) in the remainder of the places (approx. 95).

As it stood that would mean that while it would be possible to park there overnight, all vehicles would have to be moved by 10 am. While thus not strictly unusable, these spaces would in a sense be lost for offshore residents for parking over the weekend, or if you were not going off the next day.

The counter proposal that SIRA/WPCA committees have put forward is to make the 4P spaces exempt for CPPP holders. It is unfortunately hard to argue against the removal of the unsafe parking places.

What we need to discuss is whether there is general community preference for the SIRA/WPCA proposal. Two other  options are:

It is important to realise that the residents in these local back streets will have influence on this decision as they are directly affected. The SIRA Committee has approached the onshore resident associations to ask for their support. We think they probably would support a change (no status quo), but the question is whether they agree to the CPPP exception or would rather have the broader Pittwater Residents exception.

3)    Who can purchase a Church Point Parking Permits?

Currently, CPPP are offered for sale to anyone who would like to buy one. This has obviously consequences for the number of people competing for car parking at Church Point. The SIRA committee’s rationale for proposing it should be Offshore Residents only is that they are the people that qualify for a resident parking scheme (they have no off-street parking) and are in the highest need. Besides, it would put a cap on the number of permits available.

The following other options have also been discussed:

In the last proposal that was put before Council and was not adopted at the time, the proposal was to increase the number of 4P spaces in the current car park from 9 to 20.

The SIRA/WPCA Committees have proposed that there is no increase of these 4P spaces as they would increase the competition for car parking spaces and therefore reduce the number available to offshore.

Currently, the Council’s budget assumptions include a CPPP fee of $500 for the first car per household to a fee of $750 (50% higher) for a second and subsequent cars. The rationale is that this will put pressure on households to have less cars. This will affect the household budgets for a number of offshore families. Our discussion could focus on the following alternatives:

The current Council Budget Assumptions include 50 PLSs in the new carpark (out of a total of 120 spaces). These will be leased to residents and/or businesses who are prepared to pay an annual fee of $5000.

The Pros for the PLS are that the fees for CPPP holders can be kept lower to make the budget balance and also if the leased spaces are sold only (or primarily) to people who currently have a CPPP and park in the carpark these cars will then be moved out of the general parking areas into the leased spaces. .

The Cons are that these spaces will be less than 100% utilised at times. For example, when all other spaces are occupied, lease holders may not be home and therefore there would be parking spaces empty, while other residents are still looking for a place to park. The other disadvantage is that it in part privatises the area.