Church Point is a vital part of life for the communities of Scotland Island and the Western Foreshores. Its ambiance, amenity and facilities are of major practical and social significance to offshore residents. It is also a space shared with many other users, both visitors and local residents.

‘The Point’, as it is known by locals, is an active transport and social hub: ferries carry offshore residents to and from their homes, the Commuter Wharf provides mooring for the many commuter ‘tinnies’, locals and visitors gather for coffee and meals at the Waterfront Cafe, and residents pick up their mail and buy supplies.

Parking at Church Point has been a challenging issue for many years, and its environmental, social and economic aspects have been much debated. In 2009, the former Pittwater Council adopted a Plan of Management for the precinct, and in December 2013 voted to extend out the road and pedestrian walkway along McCarrs Creek Road, opposite the commuter boat wharf, and to build a 120-space carpark under the cliffside with other works to improve the amenities at the site.

In this section you can read a short history of the site, review the timeline of events, and access important documents relating to the site.

Links to some recent relevant documents 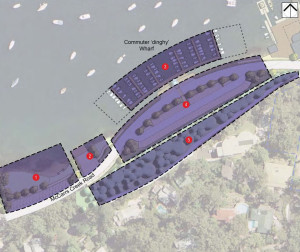 Church Point is the gateway for the 560 households that make up the offshore communities of Scotland Island and the Western Foreshores. Many of us pass through or spend some time at Church Point on a regular basis. Mooring a boat, parking a car (or trying to), catching a ferry, eating, drinking talking, mingling, picking up mail, or occasionally late at night waiting for collection by the water taxi, family or neighbour.

The offshore residential areas have grown and developed with little planning for infrastructure. A long term local problem has been the shortage of parking spaces, making it difficult for people to access their homes. In the latter part of the 20th century this was primarily only at peak times, but since then the problem has now become a daily one for those attempting to get home from work or study. Almost every night local parking is exhausted and a search for backstreet parking is required.

In the early 1960s, the area known as the ‘carpark area’ at Church Point was ‘infilled’ for the purpose of car parking. In 1971, this area was reserved for Public Recreation purposes. In July 1995, this changed to Public Recreation and Urban Services (Parking). During the 1970s & 1980s, several community consultation processes, reports and design plans were undertaken in relation to Church Point. None were implemented.

Prior to 1988, there was parallel parking along the waterside of McCarrs Creek Road from the Waterfront Store to Cargo Wharf. In 1988, Warringah Council demolished the old stone wall, which remains as rubble strewn along the water’s edge , and constructed a narrower, boulder wall closer to the edge of the road, resulting in the loss of approximately 25 public car parking spaces.

In 1993, significant works were carried out in the carpark area. This rationalised the internal carpark layout and increased landscaping, creating carpark facilities for approximately 300 vehicles. These facilities are considerably less than the previous arrangements where up to 360 vehicles could be accommodated, albeit on a more ‘chaotic’ and informal basis.

In 1995, Pittwater Council prepared a Draft Management Plan for the main reserve. In 1997, further ‘maintenance’ work along McCarrs Creek Road, behind Holmeport Marina and further up the hill, resulted in the loss of approximately a further 15 parking spaces

Between 1997 and 2001, another series of minor works were undertaken in the carpark reserve, such as the introduction of pay and display, the addition of several disabled parking spaces, the inclusion of speed humps and the rationalisation of the space adjacent to the Pasadena. Though necessary, these changes also slightly reduced the available parking.

From 1997 to 2007, the Management Plan underwent a series of revisions and many further options were explored, including an underground carpark in the reserve.

Adoption of the Church Point Plan of Management 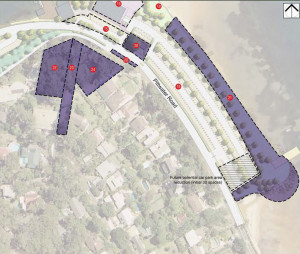 In 2009, a new and more comprehensive Church Point Plan of Management (POM) was adopted by the former Pittwater Council. This plan included a new vision for the centre of Church Point; a redesign of the existing overcrowded Commuter Wharf; the creation of an additional 60 parking spaces opposite the Commuter Wharf, with an option for an additional deck level (total 120 additional spaces); and the broadening of the green walkway in front of the main carpark reserve. The building of the additional infrastructure was supported in two large surveys of offshore residents and in discussions at several community meetings.

In 2012, the new Commuter Wharf was built and, in December 2013, the decision to proceed with the deck option was adopted by Council. In 2014 the local offshore and onshore resident associations met and agreed upon a common position on four demand management/parking arrangement strategies. This common position was communicated to Council in a joint letterhead communication. In 2014 GTA consulting were engaged by Council to provide a report on “Demand Management” strategies for Church Point. In October 2014 the application to the NSW Government’s Local Infrastructure Renewal Scheme (LIRS) for a loan subsidy was approved. This provides a 3% subsidy for any 10-year loan that Council takes out for this project.

In December 2015 Council received a detailed report on Church Point including the outcomes of the review of environmental factors, the report by GTA Consulting and also a number of recommendations from Council staff about changes to parking rules in the Church Point foreshore and surrounding streets (Eastview, Quarter Sessions and Baroona). The decision to proceed to tender was made and it is expected that the project will commence before the end of the financial year. Following concerns raised by Offshore Community Associations regarding some of the recommendations about changes to parking rules in the Church Point area, at the December 2015 Council meeting Councillors passed a motions requesting a further review and report on the future parking arrangements. This review should include considerations of possible exclusivity for Church Point Parking Permit holders in some areas at some times and considerations of exemption for this group from time limited parking in much of this area.