The public wharves are maintained by Northern Beaches Council and are a vital conduit to and from the island. The heritage ferry sheds also serve as community spaces: people put up notices, collect their newspapers, chat, and even pick up reading material: several of the sheds boast a self-lending bookshelf.

There are five public wharves on the island: Bell, Carols, Eastern, Tennis and Cargo.

Northern Beaches Council is developing Plans of Management for all wharves within the Pittwater. 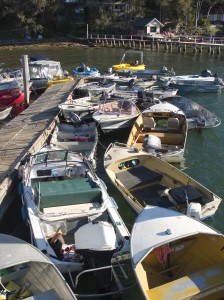 Facilities for commuter boat tie-ups on the island are extremely limited. Beach moorings and tie-ups at public wharves are considered illegal by NSW Maritime and Northern Beaches Council.

Cargo is managed by Northern Beaches Council. There is a limit of 18 permits with an annual fee by Council. Currently there is a wait list. Council contact below:

Tennis is a private pontoon managed by the Tennis Users Group (TUG). SIRA holds the license for the pontoon with Northern Beaches Council on behalf of TUG. There is a limit of 40 boats with a levy for maintenance and liability insurance. Currently there is a wait list. TUG contact below:

Tie-ups at jetties and wharves operate under informal but time-honoured arrangements. Usually, those who have been there the longest get the best spots with regards to access and tides. There is no set management. Tie-up spots are not part of a house property’s lot and therefore can not be sold with a property.

Current expansion plans are being developed for Bell and Carols wharves with assigned tie-up spots.

Some boat owners negotiate a tie-up spot with owners of private pontoons.